Warning: The magic method Vc_Manager::__wakeup() must have public visibility in /home/seantambagahan/public_html/wp-content/plugins/js_composer_theme/include/classes/core/class-vc-manager.php on line 203

Spread the love
Does God exist?
I believe it is just as easy to prove that God exists as it is to prove that truth exists.  The bible teaches that all men have knowledge of God.  The problem is that we have all rejected true knowledge of God.
Romans 1:19-20 says
Since what may be known about God is plain to them, because God has made it plain to them.  For since the creation of the world God’s invisible qualities—his eternal power and divine nature—have been clearly seen, being understood from what has been made, so that men are without excuse.
This passage tells us that the character and attributes of God are obvious to us just by looking at the created world.  The study of God’s creation is called science.  We do not need to read the bible to know that God exists; all we have to do is look around at His creation.  Just like looking at a building proves there is a builder, and looking at a painting proves there is a painter, looking at creation proves there is a creator.  So we can then ask the question: what are the attributes and characteristics of God that are seen in creation?  To help us understand the character of God, we just need to think about the character of the universe.
Science Points to a Creator
For centuries, scientists believed that the universe was eternal; that it’s all that ever was; that it never had a beginning; that it was eternal in the past.  However, modern advances in science have pointed to a definite starting point of the universe.  Two scientific advancements that prove the universe is not eternal are: cosmological redshift, and the second law of thermodynamics.  Cosmological redshift (or Hubble’s Law) basically affirms that the universe appears to be constantly expanding, which is impossible if the universe never had a beginning.  The second law of thermodynamics essentially shows us that the energy in the universe is in a constant state of decline, which is also impossible if the universe was eternal in the past.  In order to not go too far off on a tangent, I’ll let you do your own research to find out more about these two discoveries.  The point I wanted to make is that science proves that the universe had a beginning.
The Kalam Cosmological Argument
The Kalam Cosmological Argument is a very strong philosophical argument for the existence of God.  Dr. William Lane Craig is probably the most popular modern day philosopher who has revived the Kalam argument and uses it in several debates.
In a debate against atheist Quentin Smith, Craig said:
“We have good reasons, philosophically and scientifically, to believe that the universe is not eternal in the past, but had an absolute beginning. But something cannot come into being out of nothing. Therefore, there must be a transcendent cause of the origin of the universe.
We can formulate this argument as follows:
1. Whatever begins to exist has a cause.
Now by “begins to exist” I mean “comes into being,” and the idea here is that things don’t just pop into being uncaused…” 2
“…So premiss (1) seems necessarily true. If the alternative to theism is the claim that the universe popped into being uncaused out of nothing, then it takes more faith to be an atheist than a theist!
Now, premiss (2) is that:
2. The universe began to exist.
Recall, by “the universe” we mean all physical states, including whatever exists at any point in, or on the boundary of, space-time.  And Quentin and I agree that the universe is not infinite in the past but began to exist.
From the two premises it follows that:
3. Therefore, the universe has a cause of its existence.
Conceptual analysis of what it means to be a cause of the universe enables us to deduce that as the cause of space and time, this cause must be an uncaused, timeless, changeless, immaterial, personal agent of enormous power which created the universe.” 3 (emphasis added)
What can we know about the first cause of the universe?
When you ask most skeptics “what caused the universe to exist?” they will say “the Big Bang did it”.  What they don’t realize is that a “bang” can’t cause anything.  If you went to the hospital with a bullet wound and the doctors asked what happened, you probably won’t say “there was a loud ‘bang’ and I ended up here!”  You would say “someone shot me!”  The bang was just the effect of someone pulling the trigger – it was not the cause.  In the same way, the “Big Bang” was just the effect of someone or something creating the universe – it was not the cause.  Whatever causedthe universe to exist is outside of the universe; therefore the cause is not bound to the laws or principles found within the universe.
Think of the universe as being like a gigantic box.  Everything that we can see, smell, hear, taste and touch is inside of this box.  The universe contains time, space, matter and nature.  God is outside of the box, and is active within the box.  He is not limited to the contents of the box, but greater than them in every way. 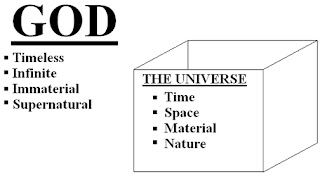 So, how would you convey all of that information in laymen’s terms without getting too technical, and without using a diagram?
The conversation usually goes something like this:
“Do you believe in God?”
–          No
“Oh, really?  Where did everything come from?  I mean, why does everything exist, instead of nothing?”
–          I don’t know.  I believe in science, like the Big Bang theory.
“I believe in science too.  Did you know that science actually proves that the universe hasn’t always been here?  In fact, science proves that the universe had a beginning, which means something caused the universe to exist.  Whatever caused the universe to exist is outside of the universe (it didn’t create itself).  That’s called transcendent.  Further, whatever caused the universe to exist is outside of nature, and according to science, anything outside of the laws of nature is considered ‘supernatural’.   That means that science proves the universe was created by a powerful, supernatural, transcendent force… I call Him God.
Now, the most important question is not ‘does God exist’, because we all intuitively know that we didn’t all just come from nothing.  The most important question is “if God exists, what does that mean for you?’”
… And with that, I would move to the more important question of “what is God like”, at which point I would transition to the gospel.

How to Witness to Jehovah's Witnesses

Can I Trust the Bible?

So, I have COVID!